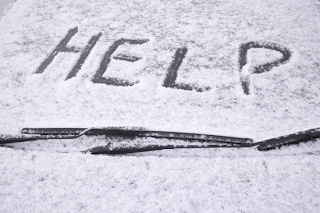 Well we got about 10 more inches of snow last night.  I am currently on a business trip in Minneapolis and staying in a hotel.  When I went out to the parking lot my car along with many others were covered in snow. I proceeded to scrape off the snow of my car.  When I was done with my car I decided to clean off all the cars in my row. It total, for my act of kindness today, I cleaned off six cars. When I was on my second to last car, the owner actually came out to his car. At first I think he was a little confused that some stranger was cleaning off his car. When I told him that I just felt like helping clean off stranger's cars while my car warmed up he was very appreciative. He then told me he was from Texas and was not used to this weather.  So, in think in the end, I not only helped clean off his car, but I also think I helped the people he was going to be driving in front of later that day because my guess is he would not of cleaned off the top of his car and would have blinded the driver behind him with the snow drift from his car. Typical southerner mistake!
Posted by Unknown at 5:26 PM