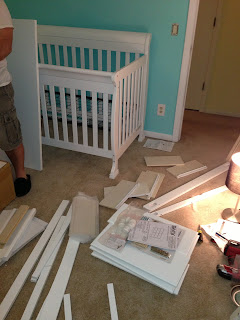 I am not a handy person.  I blame this on my dad.  He has taught me so many great things, but, "how to be handy" was not one of them.  I have improved my skills a ton since owning a house but there is still a long way to go. A lot of times I make a lot of stupid mistakes.  Take this for example; about a year ago I spent an afternoon assembling a crib for my soon to be born daughter.  I was so proud of myself when I was finished, sure it took a couple hours longer than it probably should have, but I did it and the crib looked glorious.  There was just one problem that I soon realized; I assembled the crib in the living room so I could watch tv during the construction.  When I went to move the crib to the nursery, I realized there was no way it was going to fit through the door.  I had take apart the crib and re-assemble it in the nursery.  This is an example of the mistakes I make.

So, today for my act, I helped my brother-in-law assemble this exact same crib and a dresser.  I'm sure he wouldn't have made the same mistake I did, but at least we were able to get it done quicker with two people.
Posted by Unknown at 4:20 PM