I was contacted yesterday by a person who has gone through a lot of hardships in the past 7 years.  She reached out to me because she wanted to see if she could share her story in hopes of inspiring others.  I had no problem with that at all because that is a huge part of why I am doing this....to inspire.  So today, for my act of kindness, I helped a stranger share their personal story. See below. 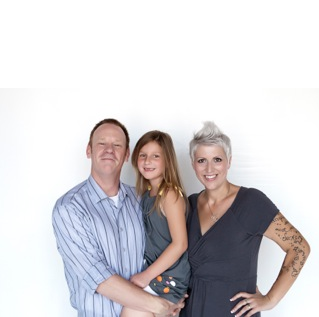 Heather and her family

My Battle Against Cancer

No matter who you are, at certain times, you're going to have to depend on others and let them help you through. I learned this lesson when I was 36 years old. On August 4, 2005, my beautiful daughter Lily came into the world, and everyone in our lives was rejoicing. Little did we know what was going to come next.

After returning to work, I was feeling so tired, and I had no energy. I also experienced extreme weight loss, and I became rather concerned. I knew that weight loss and fatigue could be attributed to adjusting to new motherhood, but I had a feeling deep down that it was something much worse. Only three and a half months after Lily was born, I was diagnosed with malignant pleural mesothelioma. As a child, I had been exposed to asbestos, and now, here it was, back to haunt me.

At this appointment, I was told that without treatment, I would live for 15 months. How could I leave my baby without a mother at only a year and a half old, and how could I leave my husband a widower? I simply couldn't do that. Therefore, we flew to Boston so I could be taken care of by one of the best doctors for mesothelioma. On February 2, 2006, my left lung was removed in an extreme surgical procedure called an extrapleural pneumonectomy. This was followed by 18 days in the hospital, and eventually chemotherapy and radiation treatments as well.

My baby was always on my mind. When I went to Boston, Lily went to live with my parents in South Dakota. The whole community came out to help them. Children who I babysit for and childhood friends with whom I had gone to church were there offering support to my parents. Back in Boston, I was making friends, and they were offering me an incredible amount of support. Thankfully, my parents sent me pictures of Lily learning how to eat real food, roll and move around by herself. The nurses would look with me, and we would rejoice in her accomplishments. Despite the rejoicing, I missed her so terribly. However, I always remembered she was for whom I was fighting.

The affection and attention she received from my parents is quite evident. Although they now only see her every few months or so, the bond is truly there. As an entire family, we have worked to really understand what life is about. It can be over in the blink of an eye. To you, I say embrace everything that life brings. In practically every situation, you can find good and bad, and that is the peace that cancer brought to me.  I am so happy to be able to say now that I have been cancer free for 7 years! Every six months I go to see my doctor in Boston for new scans to make sure my cancer has not come back.

The main goal of sharing my story is to spread awareness of mesothelioma. Sadly, mesothelioma is 100% preventable if only asbestos were banned. Many people are not aware that asbestos is not still even banned in the US. There are thousands of people who suffer and die each year due to this disease, and I am one of the tiny percentage of those people who have survived this incredibly deadly cancer.

Because of this, I feel that I am the voice for all others who we've lost and it's my duty to spread mesothelioma awareness as well as be a source of inspiration, hope and guidance for anyone who finds themselves in a similar situation to my own. Although mesothelioma may not be a very relatable topic, I know there are plenty of mother out there who have gone through similar situations and sicknesses. Ultimately, I just want to inspire people with my story while raising awareness.