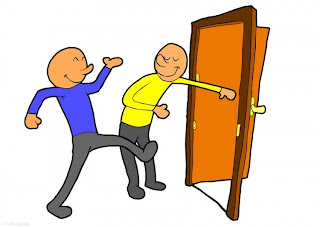 Today's act was an unexpected one.  When I was driving to St. Louis this morning I stopped at a McDonald's to get something to eat.  When I was walking in, I noticed an older guy walking towards the exit so I held the door for him and then went and opened the next door for him.  When I walked into the restaurant after holding the door an employee behind the counter commented that what I did was very nice.  She then asked what I wanted to eat and told me that it would be free.  This was very unexpected but I though it was a very nice gesture.  Then I looked up at the menu and realized it was only 10:15am and they weren't even serving lunch yet, which is what I wanted.  So I thanked her for her offer but told her I wasn't going to get anything.  I then asked her if she would do me a favor and offer my free meal to the next person who came to order.  She said she would do that, so today, for my act I got a free meal for the next person in line, due to a kind act of another person, due to me holding a door.  Just goes to show how kindness is contagious.  Pretty cool.
Posted by Unknown at 5:32 PM