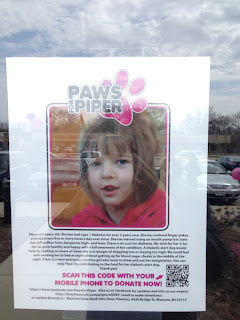 A couple of weeks ago a great fundraiser called Paws for Piper Cut-a-thon was brought to my attention  (Thanks Wendy Ellis). This fundraiser is for a cause that is very similar to one I donated to earlier this year on "Day 12".... Canine for Caden. In this case, a 6-year-old girl named Piper has type 1 diabetes in which there is no cure for.  However, a service dog who is trained to sense when blood sugar levels are dangerously low could be a huge help for the family.  The only problem is the cost of this dog is $18,000.

So today, for my act of kindness, I participated in the fundraiser, Paws for Piper.  It was so cool to see how many people were in support of this cause, and not just by the people who supported it by donating money like me.  There were so many other people who helped.  From the stylists who took time out of their schedule to cut hair and paint nails, to the people who brought in baked goods and worked the doors.  It was a true sense of community on display this afternoon and I was happy to be a part of it.  Plus, I got a really nice haircut out of it as well!
Posted by Unknown at 3:12 PM