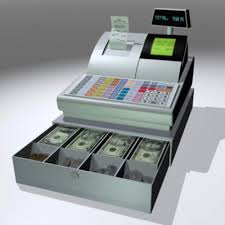 When I was in high school I had a job as a cashier at Best Buy.  At the end of each day we had to balance out our register to make sure our amounts were correct.  I was one of those people who if the change came out to 99 or 98 cents I would always give the customer those cents so they could get a bill back instead of a handful of change.  Because of this my drawer was usually off a few cents which wasn't a big deal.  However if it was off much more than that it would have been an issue.

Today I went out to the lunch with my family.  When the bill came we split it up by paying with two debit cards and a $20 bill. I told the waitress to use the cash and then split the rest between the two cards.  When she came back I discovered that she did all this correctly but there was one thing incorrect....although she deducted the $20 from the bill, she didn't take it.  So now I had a decision to make...do I overlook it and pocket the cash making me $20 richer and her drawer $20 off, or do I let the waitress know about the money?  To be honest, there wasn't really a decision to be made in my mind...for my act of kindness today I returned the money to the waitress to make sure it didn't mess up her balance.
Posted by Unknown at 6:02 PM